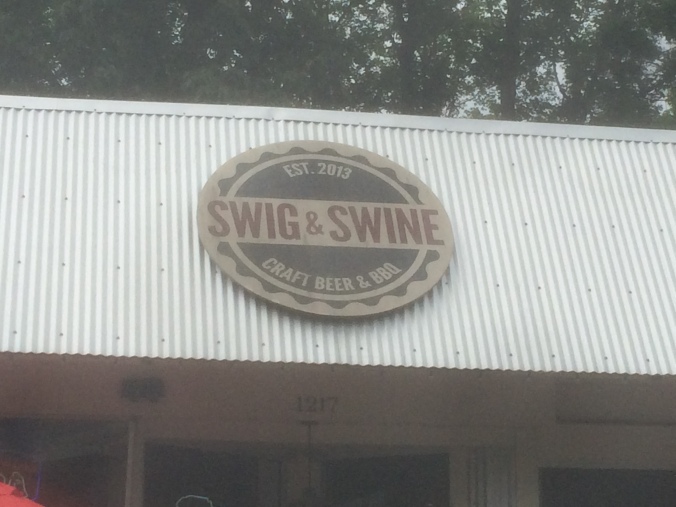 Speedy: On the second day of my college friend bro weekend, I had to lay the smack down. “Dudes,” I said, “I’m a Barbecue Bro. My readers expect – nay! – my readers deserve a second review from my time in Charleston. So what if we had ‘cue yesterday? We’re running it back!” And so we found ourselves at Swig & Swine, which I had driven by a couple of times on Savannah Highway.

Monk: I applaud your dedication to the cause, comrade Speedski!

Speedy: From an atmosphere perspective, this restaurant has everything you want from a new school ‘cue joint – a nice rustic feel, a great bar, and large beer selection. We took a seat in the bar section and our waitress quickly approached. We immediately ordered some smoked wings for appies. I added on to that by ordering the three meat combo (because I was having a hard time making decisions).

Monk:This wouldn’t have anything to do with your previous night’s activities impairing your thinking ability would it?

Speedy: I would prefer to not answer that question, Monk. Anywho, due to the events at Home Team BBQ, I have extended my brisket ban to South Carolina (with one notable exception), so I ordered the pulled pork, homemade sausage, and tacked on the pork belly, which I was excited to see. Traditional NC side vinegar slaw and traditional SC side hash and rice rounded out my order.

Monk: Ohhh, hash and rice. Really curious how you found this? I thought it was a bit weird myself.

The wings came out first and they were divine. Smoked perfectly and tossed in a red ‘cue sauce, these wings were meaty, tender, and full of smoke flavor. They were nearly perfect. This got me super excited for the rest of the meal.

Monk: So far, so good. Now let’s just see if the rest of the meal holds up…

Speedy: Sadly, I was let down.

Speedy: The pork was decent, but lacked smoke and was a little dry. The table was stacked with several sauces (red, vinegar, mustard, white), so I added some vinegar sauce and it did help. Overall, the pork is passable, but not great. Which is more than I can say for the pork belly. Pork belly should be crisp on the outside and melt in the mouth on the inside, which this was not. Instead, it was tough and lacking of flavor. I’m certainly no expert in smoking pork belly, but I expected more.

The sausage was actually good – the best meat of my entree. It was definitely homemade and had a nice snap and really good flavor. I would’ve preferred it to be a little spicier, but that’s just me. Overall, I’d get this again.

Monk: Could you tell what smoking method Swig & Swine used? Sounds like a gasser to me.

Speedy: I’m not sure – that would be my guess as well, but I didn’t go check it out. The slaw was forgettable and the hash was decent, and something I’d order again, though I’m not familiar enough to know how it stacks up.

Overall, I was really hoping for a special meal, especially after tasting the wings. Unfortunately, I ended up with an average experience.

Monk: So far, between this place and the two Home Team BBQ’s you’ve been to it doesn’t seem like there is much to Charleston barbecue. I expect this to change when John Lewis opens his place later this year. 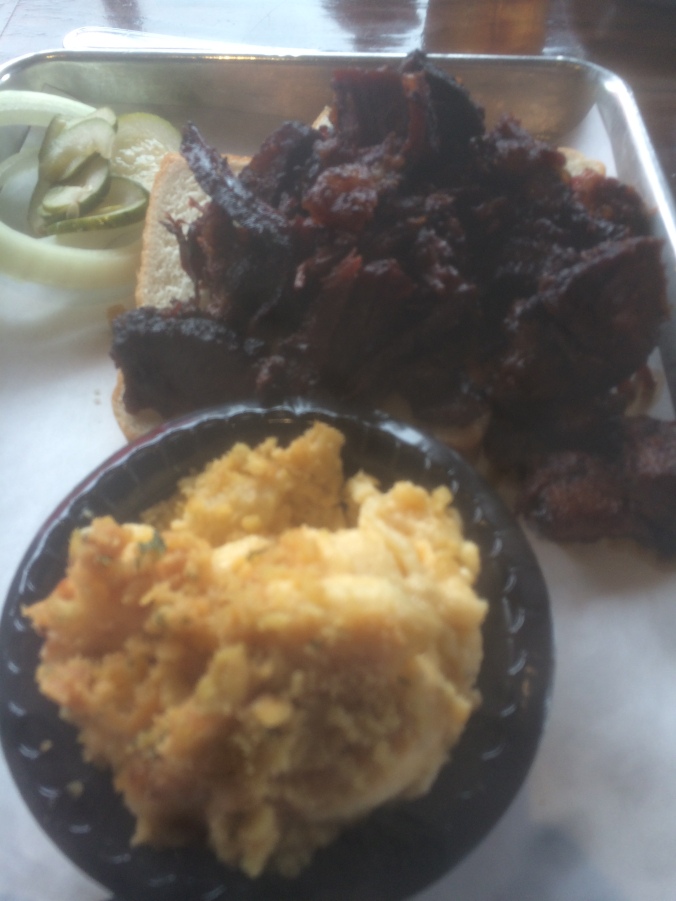 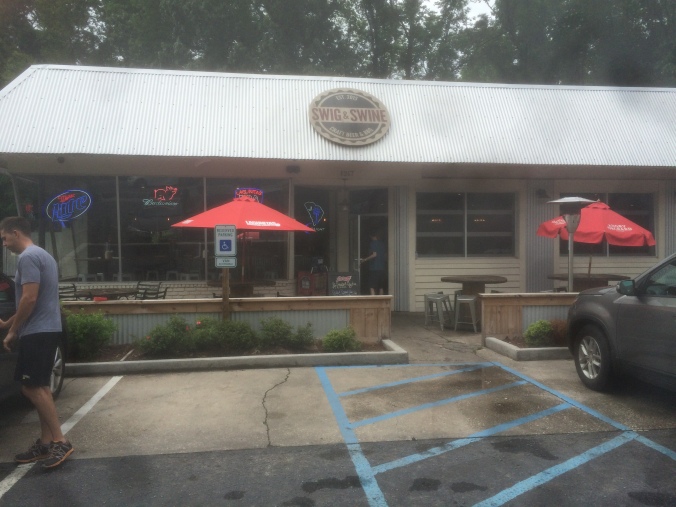 Unfortunately they can’t all be winners, and that’s the case in this week’s review. At least, Randy’s Restaurant in Lexington has a decent sign. Link in profile.
Fantastic Texas trinity at the @primebbq preview today. Firemaster Christopher Prieto has put a lot of thought into every square inch of his soon-to-be-open barbecue restaurant, and it shows even through the construction dust. The Raleigh barbecue scene will become that much more crowded in 2020, but Prieto and company are building themselves a destination barbecue restaurant in Knightdale, and the community should be very excited based on what I tasted today. More thoughts to come on the blog soon. -Monk cc @barbecue_nerd #bbqforall
Three years living in TN and still @martinsbbq is the best I’ve found in the state. -Speedy
Thanks to @bbqtourist and @nycbbq for letting me write an article that combines two of my passions, barbecue and TV. It appears in this week’s issue of @thesmokesheet. Check it out and let me know what you think. Link in profile.
The brick pits at Kerley’s Barbecue in Welcome sit dormant, having long cooled in favor of a gasser. Unfortunately, that spells bad things for the cue in Monk’s latest review. Link in profile.
Almost 3 years to the day that I first tried @jongsbbq at @southern_range and today was seemingly their biggest crowd yet. Brisket was amazing as usual, and the Cheerwine and jalapeño cheddar hot links were on point. I was glad to meet @brisketandbagels for the first time and chat with @the_philpott briefly while introducing my buddy @lukekware to the majesty that is Garren’s brisket (best outside of Texas, according to him). Big things coming for Kelly and Garren in 2020. -Monk
In this week's review, Monk visits the relatively-new-but-old-timey-feeling Rick's Smokehouse in Welcome outside of Lexington. Here's a close-up of their chopped tray with red slaw. Link in profile.
Great to meet up with Sean (@nycbbq and 1/2 of @thesmokesheet) at John Brown Smokehouse tonight and talk all things barbecue over a meal of burnt ends, pork belly, and pulled pork -Monk
#tbt Have you checked out our latest featured post where we get to know Jordan from @bbqkingnc a little bit better? Well you should! Click "Pitmaster Profiles" at the link in our profile.