Autumn in North Carolina usually means heading to the mountains to see the leaves turn, go apple picking, or just feel true fall weather (especially when it can occasionally stay in the 90’s until late October in the Piedmont). From Charlotte, its but a short 2-hour drive to Asheville via US-74/I-26. While it may not be physically possible to hit all of the spots below, if one were to pick and choose from the list below I’m pretty confident he or she could have a pretty great time.

Heading west, Shelby is a town about 45 minutes from Charlotte and home to two competing barbecue restaurants under the name “Bridges” – Alston Bridges Barbecue and my pick, which has been and always will be Red Bridges Barbecue Lodge (website) right off 74. This joint, a recent winner of both the Thrillist and Garden & Gun March Madness Barbecue Brackets in back-to-back years, is a pretty true representation of Lexington-style barbecue smoked over handchopped wood logs (check the enourmous wood pile out back).

In historic downtown Shelby, Newgrass Brewing (website) has burst onto the scene to be the first brewery in Cleveland County. While there is small plates available at the brewpub, the beer is the main attraction and they have a little bit of everything from your standard hoppy wheat or IPA to Fall seasonals to the occasional sour or gose. 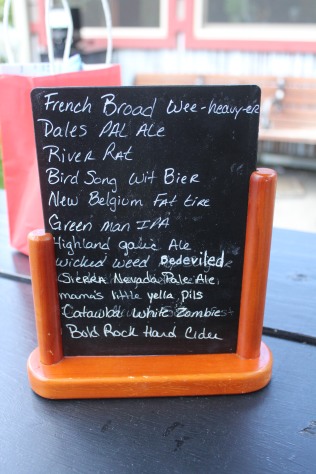 Alternate – A little further down the road towards Asheville, Green River Barbeque (website) is just a half mile away from the main strip in downtown Saluda, a charming little mountain town just off the (you guessed it) Green River. Their beer list is a little on the smaller side but they keep it pretty local. If you’re lucky, snag a table on their small-ish patio and enjoy the crisp fall mountain air. 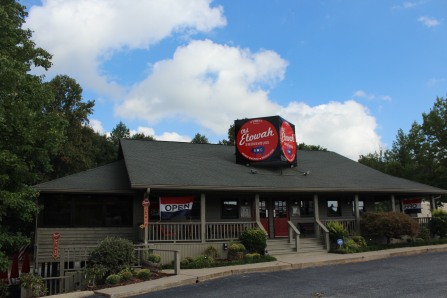 Many of the apple orchards are just outside of Hendersonville, NC and in nearby Etowah the Old Etowah Smokehouse (website) recently opened in a location formerly occupied by The Barbecue Shack. While I never made it to there, the new tenants (led by Mike Moore, co-founder of Blind Pig Supper Club and former owner of Seven Sows) are the latest NC joint to smoke whole hogs the old fashioned way. 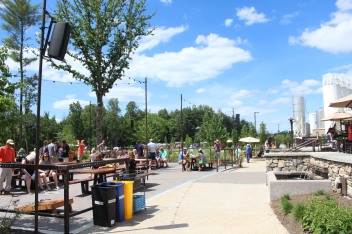 A mile or so past the Asheville Airport in the small town of Mills River, is Sierra Nevada‘s beautiful, sprawling campus (website). If you haven’t planned ahead and gotten a reservation weeks in advance, you wont be able to go on the guided tour (the shorter, unguided tour is still an option, however). But there’s still plenty to do – dine at the brewpub, play cornhole or bocce out back on the patio, walk the grounds, or sit by a firepit and listen to live music if the weather is cool enough.

Alternate – At the foot of the Pisgah National Forest, you reach the Oskar Blues Brewery’s east coast operation in Brevard (Facebook page). Here, you can try the beers from  the brewery that started the beer-in-a-can craze back in 2002 (albeit from their original Lyons, CO location). 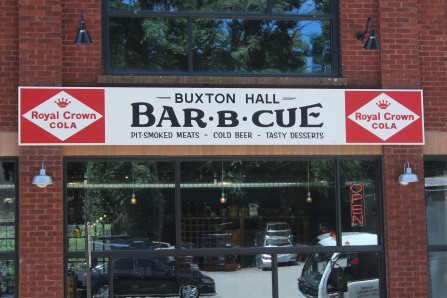 Buxton Hall Barbecue (website) was the first of the new wave of NC whole hog joints, opening in August 2015. Pitmaster Elliot Moss originally hails from the Pee Dee region of SC (specifically Florence) and he brings that style of barbecue to the bustling South Slope neighborhood of Asheville. Other Pee Dee influences on the menu are barbecue hash and rice and chicken bog (a gumbo-like rice dish). However, be warned that with Buxton Hall being named one of Bon Appetit’s 10 best new restaurants in America, you may find yourself waiting.

Back patio at Burial

Buxton Hall pitmaster Elliot Moss and me at Burial Brewing