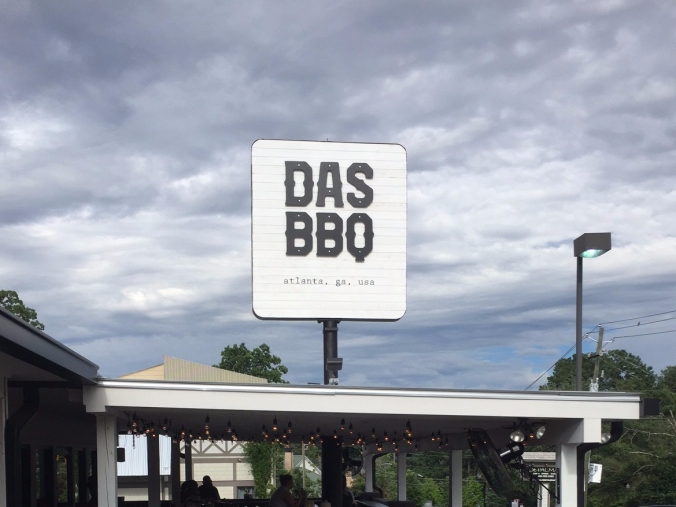 Rudy:  I knew that Monk had already reviewed Das BBQ on a trip to Atlanta, but when I went to visit family they told me they wanted to take me to their new favorite barbecue restaurant. Who was I to complain? I didn’t recall how the place had rated, so it was good to go in without any preconceived ideas of what to expect.

Like Monk said, they have a Texas-style feel to them. That’s evident from the menu and also from the decor around the place. I noticed some photos of some of Lockhart’s most famous joints. It is also has a Texas-style menu (meats by the pound), however when I asked them for a single piece of chicken or quarter pound of pork (feeding Rudy Jr) they looked at me like I had two heads. Most places in Texas you can order almost any increment of weight (even ask for a single slice of brisket, turkey, etc.). From what I heard, the owners spent some time in Texas learning the tricks to the trade before opening their venture in Atlanta.

The time that they spent learning about Texas-style barbecue, specifically in relation to the brisket, was time well spent. I got a piece of moist brisket and it was fantastic. The smoke was not too overwhelming and it had a great mixture of salt and pepper in the bark. I tend to have low expectations for brisket outside of Texas because of my past experiences, but I was pleasantly pleased with the offering from Das.

Monk: Couldn’t agree more about the brisket. They are putting those Franklin-spec offset smokers to good use.

Rudy: I opted for the spicy sausage, which I thought was fine but not one that I was in love with. I didn’t notice that much of a spice from it, more just pepper flavor. The other thing, and this is purely a personal preference, I tend to like jalapeno and cheddar sausage over just jalapeno sausage. I feel like the creaminess from the cheese compliments the spice. I know I shouldn’t count off for that because they weren’t even offering that type of sausage, but these are my arbitrary rankings, so I’m counting off. 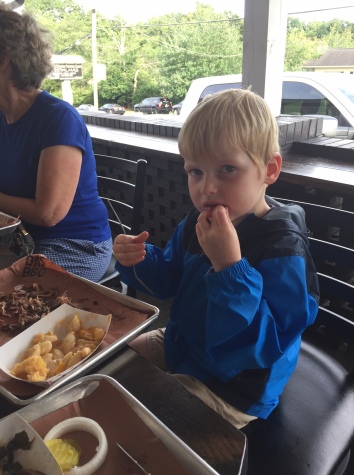 Monk: Loyal readers may recall that the sausage is imported from Meyer’s Smokehouse in Elgin, TX so its legit authentic. Although come to think of it, I don’t know that I’ve had a jalapeno cheddar sausage before (we know Speedy definitely hasn’t) but that’s now officially on my list to try.

Rudy: The pork was moist and flavorful. Nothing too special about it, but still very good. I liked it more than the sausage and Rudy Jr definitely did. He opted to eat a decent amount of it before turning his attention to the mac & cheese (priorities).

As far as the sides, they were serviceable. Mac & cheese was standard offering. The collard greens were good, but definitely on the spicy side. I did not mind that, but others with my group were not expecting that and were not fans. One side that I did not order, but tried from another person’s order, was the cream corn. I thought it was by far the best tasting side and also the most unique. It was not just a standard side, but had lots of flavor and spice to it.  That would be my recommendation for someone getting a side.

Monk: While you hadn’t checked out my review before checking it out, turns out we ended with pretty close ratings both overall and by meat. I’d say that’s a continued good sign for the quality of Das on two independent visits over 3 months apart.

Rudy: Overall, I was very pleased with Das BBQ and enjoyed getting some barbecue that tasted very similar to back home while I was out of town. I can definitely tell that they have done lots of studying to make sure that their barbecue tastes as close to genuine Texas standards, which is something that many places don’t do when they are that far from the state. Next time I am looking for barbecue in Atlanta, I definitely will head back to Das BBQ. 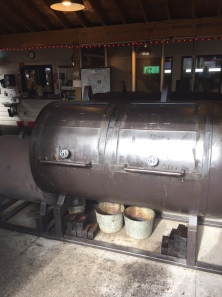 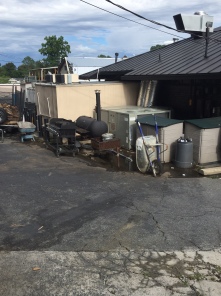