Monk: As I’ve encountered in travels in the mountains of Western NC, barbecue is very hit or miss once you go west of, say, Hickory or Shelby. For every Buxton Hall or even Luella’s, there are those places that may smoke over wood but aren’t all that good or those that don’t even bother with wood. It’s all a game of barbecue roulette, essentially. 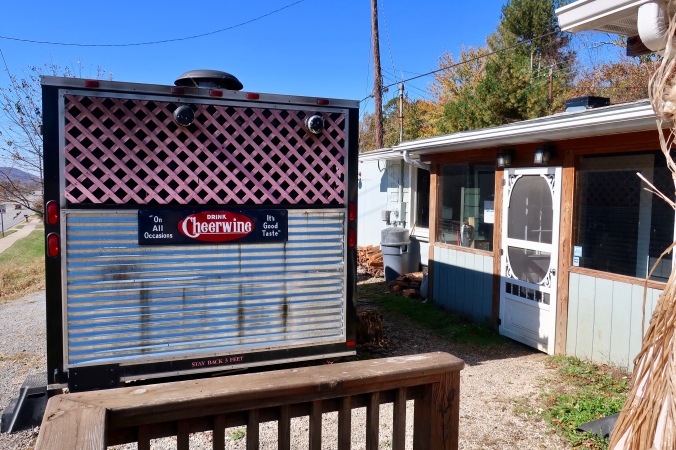 The Sqweelin’ Pig started as a food truck that smoked solely over wood when now pitmaster Buddy Clemons lost his construction job in 2012 and decided to make a late career change to barbecue. It seems as though its working out pretty well for him and his wife (who then quit her own job to help him) as this Black Mountain location that opened earlier this year is the third location after Weaversville and Barnardsville northwest of Black Mountain. Here, a trailer is positioned just outside of the main restaurant with the woodpile stacked against the building. 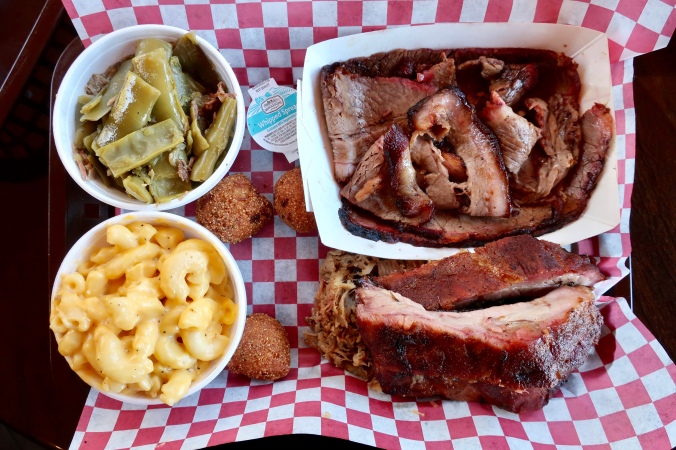 The wood smoke did come through once the three meat combo platter of pork, ribs, and brisket was delivered to the table. For the most part, the wood smoke alone didn’t make for great barbecue. The pork and ribs were passable (the pork being a bit better when adding one of their sauces, including an interesting blackberry vinegar sauce) but the brisket was what you expect at most places in the mountains of NC – thin, dried out, and with a consistency more like roast beef than Texas brisket. I’d be curious if they are reheating yesterday’s brisket.

The sides are scratch made but weren’t particularly noteworthy. I will note that all beer bottles, including several local beers, were all $2.50. My wife and I each opted for beers from High Wire out of Asheville while my father-in-law went for Coors Light. Again, each of those beers were $2.50 so not bad at all.

Unfortunately, The Sqweelin’ Pig fell into the “smoke over wood but aren’t all that good” category of western NC mountain barbecue places. I’d recommend sticking with the pork if you make it, but I’d also mention that Buxton Hall is only about 30 minutes west of Black Mountain…

Who doesn’t love a good woodpile? Any guesses where this one is in Charlotte? #tbt
A barn full of wood out back (hickory in this case) is always a great sign for a barbecue joint. That’s the case at Backcountry Barbeque in Lexington. Check the link in our profile for this week’s review.
Homemade Lexington-style barbecue dog from last week’s pork butt cc @robertfmoss
Classic design from an old friend last weekend -Monk #tbt #tbt❤️ #tbthursday
A different kind of takeout. @blacksbbq -Speedy
In this week’s review, Monk visits the Park Road location of a Charlotte standby, @midwoodsmokehouse, to try their weekend beef rib special. How’d Midwood’s version of the Texas specialty turn out? Hit the link in profile.
Real happy with how the pork butt came out today. In these weird times, it’s reassuring to know that just table salt and a pork butt smoked over basic charcoal still comes out delicious. -Monk
Support your local barbecue restaurants if you are able. Last night from @midwoodsmokehouse I got a half rack of dry-rubbed ribs small plates with mac and cheese that comes with a few hush puppies and pickles. Mrs. Monk got a Midwood salad with chopped pork. Nice way to break up the monotony of cooking from home. -Monk
#wbw Never a better time than now for curb service. Before #covid_19 there were still a few Lexington-area barbecue restaurants out there that did curb service. Now, there is almost certainly a lot more. This is from Rick’s Smokehouse in Welcome. -Monk