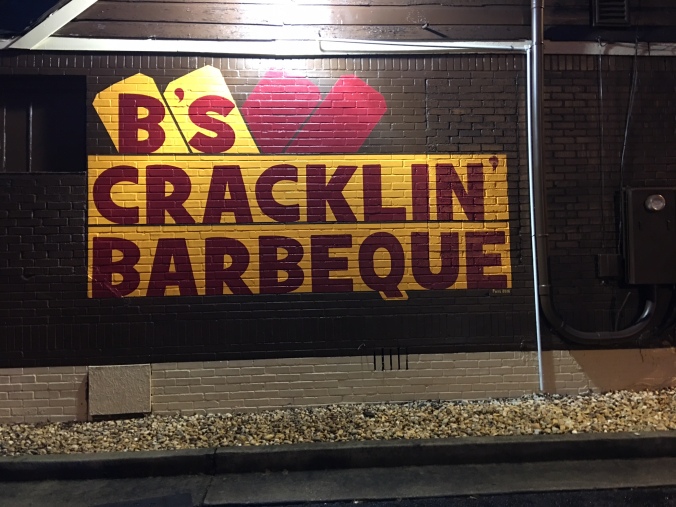 Speedy: So it’s no secret that I’ve been a little slack in my barbecue eating since moving to Atlanta. So when Grant from Marie, Let’s Eat! reached out to me letting me know he and Marie (along with their boychild) would be in town on Saturday and asking if I were interested in meeting up for a meal, I jumped at the chance. Grant and Marie used to live in Atlanta, so are very in-tune with the culinary scene, including the ‘cue. Grant suggested that we meet at B’s Cracklin’ Barbeque and after reading his review, I was pumped to check it out.

Monk: Big thanks to Grant and co for dragging Speedy back into the land of barbecue blogging. And let me be the first to say that I can’t wait to see how this visit turned out.

Speedy: I arrived mere minutes before Grant, Marie, and the boychild, and we walked in at 5 pm on New Year’s Eve to find ourselves the only patrons. Grant greeted pitmaster Bryan “B” Furman on the way in, a good sign for sure.

Monk: I’m a little shocked that you were the only folks in there, but I’m assuming that has more to do with New Year’s Eve because everything I’ve read about B’s since its September opening has been supremely positive.

Speedy: Definitely, Monk. And I think there were plenty of people there for lunch, leading to a brisket shortage. But more on that later. Walking in, B’s has an old-school feel with plenty of seating, a big outdoor space, and a counter to place the order. I could smell the smoke upon walking in – not in an overpowering way, but in a way that made my mouth water. Obviously I ordered as much meat as possible on one plate, along with collards and fried okra, while Grant went with the two meat plate (pork and brisket) with a double order of the hash and rice (bold move, Grant). The staff informed us that they were out of brisket for the day, apparently a pretty common occurrence. Our disappointment was short-lived, as pitmaster Bryan told us that he could carve some directly off the smoker for us, as long as we don’t tell anyone. (We didn’t at the time, but now you know the secret loyal readers – blogging pays off.)

The meal was delivered shortly, and we eagerly dug in. Let me say this first off – I had enough food to feed three people easily – portions were not skimpy by any means.

I’ll start with what was my favorite portion – the brisket. Being carved fresh off the smoker, I could tell we got a little extra outside (bonus!). Also, it definitely came from the point of the brisket, as it was on the fatty side. Not that this is a complaint at all – the brisket was absolutely delicious. The seasoning was amazing, and the meat was tender and juicy. Overall, this was in the upper echelon of briskets that I’ve tasted. I’m curious as to what this tastes like in a normal setting, but overall, I was really pleased with a meat that is hard to find done well in these parts.

The pork at B’s is whole hog, which is also rarely found in Georgia. The meat here was also plenty tender, but came unsauced, making it slightly dry. At B’s, there are two sauces on the table – a spicy vinegar and a peach mustard. Normally, I would immediately douse the ‘cue in spicy vinegar, but Grant just raved about the peach mustard, so that’s what I tried first. Despite my well known aversion to mustard on pork barbecue, this stuff was excellent. It’s not anything like the traditional SC mustard sauce, but is rather quite sweet without the expected tang. I ended up having a conversation with Bryan about this sauce while eating – more on that later. Of course I tried the spice vinegar as well. Adding this to the whole hog pork would let it stack up favorably to nearly anything I’ve had in eastern NC. If I had to nitpick (and I do), I would love for some cracklin’ to be included in the pork to give it a little more texture, and I feel it would be fitting given the name. But I would definitely consider the pork and brisket “must orders” at B’s.

Monk: I am shocked (shocked!) to hear that Speedy willingly tried a mustard sauce on his pork. I think this shows real growth. Well done, Speedy.

Speedy: Only  because of the recommendation, Monk. The ribs were also very good. B’s serves big, meaty dry spare ribs that have been seasoned to near perfection. They were cooked perfectly – not too tender to fall off the bone, but well enough that you got an easy, clean bite. I personally prefer baby back ribs, but I can’t say I’ve had too many spare ribs that are better. I didn’t end up adding any sauce to my ribs, but would consider seeing how the peach mustard would taste on it. Overall, though, none was needed.

The chicken was also smoked perfectly and seasoned really well. The plate came with a quarter chicken, including the wing. The skin tasted smoky and good, and the chicken was tender without being dry. As a barbecue lover, this is never my top meat choice, and it isn’t at B’s either, but it was still very enjoyable.

The sides at B’s are also quite good. The fried okra had a really tasty seasoning on it, and the collards (made with turkey) are quite flavorful. I didn’t try Grant’s hash and rice (he offered, but I stupidly declined), but it looked fantastic. I think I’ll try that out next time.

Monk: I will say, hash and rise is becoming one of those dishes that I am becoming more and more interested in. With Grant getting a double order, sounds like it’s a dish I definitely need when we go to B’s next time I’m in Atlanta. Along with everything else you ate because it all sounds pretty darn good. At the very least, we could basically get the same order and you’ll just have less leftovers.

Speedy: I would be remiss if I didn’t talk about how nice of a guy pitmaster Bryan is. He came and spoke with us for quite a while during our meal. To me, the most interesting piece was his upcoming partnership with Heinz for a mustard sauce (not the peach mustard – they wanted that recipe, but Bryan wouldn’t give it to them). Bryan said the sauce the ended up with is close, but not quite the same. He mentioned that it is a sweet mustard sauce, though (“it had to be sweet if I was going to put my name on it”). I’m looking forward to trying it!

At the end of the day, this was by far the best barbecue I’ve had in Georgia. It’s good to have a go to place to take visitors. Bryan, I’ll be seeing you again soon! 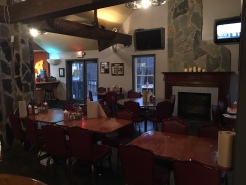