– Charlotte gets a new barbecue spot in Improper Pig, located in Cotswold, and it looks like they will be doing a little bit of everything

Here, they’re doing ‘cue, in what they’re calling a “portal to the barbecue explorer’s world.” That means it’s got St. Louis-style ribs in addition to the pulled pork and chicken and brisket, plus Southern egg rolls (sweet potato hash mixed with collards, with spicy mustard), Korean barbecue salmon, a “no pig” portobello sandwich…

– Speaking of new barbecue restaurants, Asheville is getting a new one in Bonfire Barbecue next spring that will be using a wood-assisted Southern Pride gas smoker (the article conflates the two, but to me, a Southern Pride is a gasser at heart)

– For the brisket lover on your Christmas gift list, here’s some leather butcher’s coasters 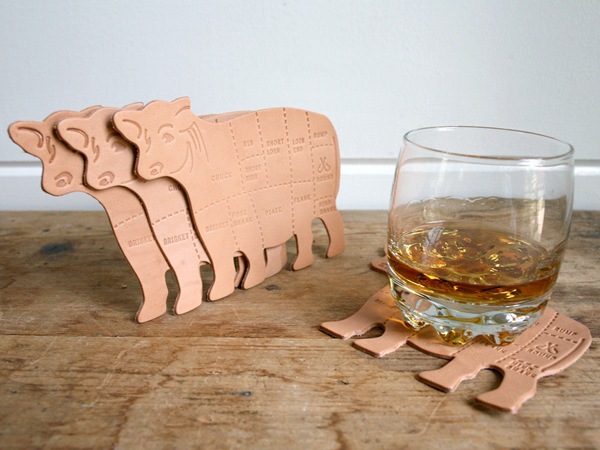 – A Wilson, NC man with ALS is planning to go to Franklin Barbecue as part of his bucket list and will be ordering the brisket and ribs (via)

– Daniel Vaughn of TMBBQ has an interview with Adam Perry Lang, who is currently working on a barbecue project in Los Angeles

The Pig belongs to Sam Suchoff, who is a 33-year-old California dude — pertinent facts, both of these. California dude is pertinent because seriously? California? And 33 because I’ve eaten barbecue older than that. He is, by far, the youngest cook I’ve met on this expedition. It’s fitting, though, and necessary, because if our children’s children’s children are going to be eating barbecue in the year 2525, someone from Generation Y is going to have to keep the pit fires burning.

– Robert Moss’ latest blog post is how to spot a wood burner; spoiler alert: the woodpile (and size thereof) gives it away

– Looks like the Buxton Hall crew was doing some research in eastern NC last week:

– If you are in Charlotte Thursday, The Great NC BBQ Map will be at the All Arts Market in NoDa

Join us & 60+ vendors this Thursday 6-11PM for the All Arts Market at #Charlotte‘s @NTheatre. http://t.co/J7N9fbz1OK pic.twitter.com/s3ZCLrBBpe

Perry's Pig Pickin' BBQ in Mint Hill sits in the corner of a gas station where an old meat counter sat years ago. Decent barbecue and good Brunswick stew. #tbt
Bubba's BBQ quietly reopened last year in North Charlotte. While most classic barbecue restaurants seem to be closing these days, it’s great to have one reopen. More at homepage link in profile.
Monk and Speedy recently made their first joint visit to Buxton Hall Barbecue (@buxtonhallbbq) in Asheville to see what, if anything, has changed as a result of recent developments. "Home Page" link in profile.
I finally made it to Longleaf Swine in Raleigh this weekend and was not disappointed.
The first #woodpilewednesday of 2023 is at @stameysbarbecue where the wood can't be contained by mere racks.
On the blog now, Monk's favorite 8 meals of 2023, including these sticky ribs from @lawrencebarbecue in Durham. Home page link in profile for the full list.
Bubba’s Barbecue in north Charlotte quietly reopened last summer after 2+ years closure due to the pandemic.
First combined visit for Speedy and Monk at Buxton Hall Barbecue for Speedy’s birthday (along with friends of the blog Cousin Daniel, Cousin Matt, and Papa Speedy). Great combo platter of whole hog, ribs, and sliced brisket. The lean brisket was just alright for us but the whole hog and in particular the ribs were quite good. After this first visit for both Bros in awhile, it's clear that Buxton Hall remains one of our favorite barbecue joints in NC. -Monk
Stopped by Stamey's Barbecue in Greensboro for the first time in a couple of years, and the meal was as good as ever. Chopped plate with extra brown and a Cheerwine just simply never misses, and it hasn't at Stamey's for the past 92 years(!).